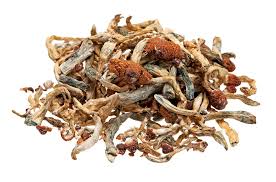 price is per gram

Psilocybin (4-phosphoryloxy-N,N-dimethyltryptamine) and psilocin are both indole chemical compounds obtained from certain types of dried or fresh hallucinogenic mushrooms found in Mexico, Central America and the United States. These compounds have similar structure to lysergic acid diethylamide (LSD), and are abused for their hallucinogenic and euphoric effects. Hallucinogenic effects are probably due to effects on central nervous system serotonin (5-HT) receptors.

Methods of Psilocybin Use

Mushrooms are ingested orally and may be made into a tea or mixed into other foods. The mushrooms may be used fresh or dried. Psilocybin has a bitter, unpalatable taste.

“Magic Mushrooms” have long, slender stems which may appear white or greyish topped by caps with dark gills on the underside. Dried mushrooms are usually a reddish rust brown color with isolated areas of off-white.

What is the Usual Dose of Psilocybin Mushrooms?

Dried mushrooms contain about 0.2 to 0.4 percent psilocybin and only trace amounts of psilocin. The typical dose of psilocybin is 10 to 50 milligrams (roughly 20 to 30 grams of fresh mushroom, or 1 to 2.5 grams of dried mushroom powder) with peak effects occurring in 1 to 2 hours, and lasting for about six hours. However, dose and effects can vary considerably depending upon mushroom type, method of preparation, and tolerance of the individual.

Effects of ‘Magic Mushroom’ Use

Psilocybin effects are similar to those of other hallucinogens, such as mescaline from peyote or LSD. The psychological reaction to psilocybin use include visual and auditory hallucinations and an inability to discern fantasy from reality. Panic reactions and psychosis also may occur, particularly if large doses of psilocybin are ingested.

Hallucinogens that interfere with the action of the brain chemical serotonin may alter:

Physical effects of psychedelic mushrooms may include a feeling of nausea, vomiting, muscle weakness, confusion, and a lack of coordination. Combined use with other substances, such as alcohol and marijuana can heighten, or worsen all of these effects.

Other effects of hallucinogenic drugs can include: